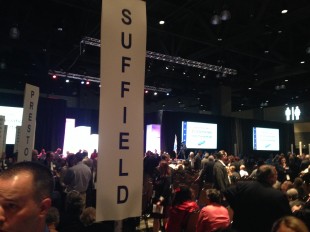 Thank you very much.

Thank you to Tina, Kirby, Steve, Dave, and Stephanie for your nominations.

Thank you to my wife Cathy and my sons Dannel, Ben, and Sam. Thank you for your endless love, support and inspiration.

Special thanks to all the brave men and women serving in the military for their service  and their families for their sacrifice.

And thank you to someone who needs no introduction, but deserves our endless praise and admiration – the single, greatest Lieutenant Governor Nancy Wyman. Thank you for being the best partner in this fight for progress that anyone could ever hope for.

Thank you also to our incredible constitutional officers, I’m proud to be on the ticket with you.

And to all the other great Democrats in this room, I can’t thank you enough. 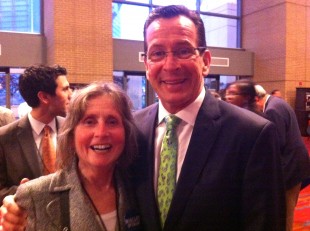 For your commitment to causes that define not just what we will do, but who we are.

Four years ago, this country faced challenges that forced every single state to take a good hard look in the mirror.

Here in Connecticut, we faced a state economy that was suffering from decades of short-term thinking and band-aid solutions. The $3.67 billion dollar deficit we faced was the worst per capita in the nation.

But we made the tough choices that helped turn our state around.

Lots of states – and lots of Governors – faced similar challenges.

But, across this country, Republican governors made very different choices—economic and otherwise that moved their states backwards.

Let me give you just a few examples:

In Pennsylvania, they cut education funding by nearly one billion dollars.

In Georgia, you can now bring a gun into an airport, a church and even a school.

Oklahoma passed a law making it harder to raise the minimum wage.

And Mississippi even passed a law allowing businesses  to deny services to members of the L-G-B-T community.

I’m not giving you these examples to tell you that Connecticut is a better place to live. 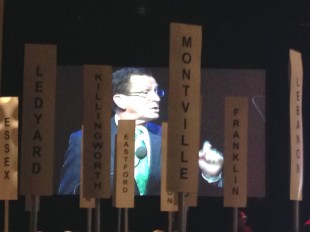 You already know that.

But these examples remind us that, while Republicans around the country are forcing debates that belong in the 19th century, Connecticut is leading the nation in making progress for the 21st century.

While we have more work to do, we’re on the right path, and we’re moving forward.

It’s a path that’s different from some of those other states I mentioned.

In Connecticut, we didn’t try to balance budgets by cutting dollars from our classrooms. We invested in our children and strengthened our schools from pre-k to college.

In Connecticut, we didn’t shrink in the face of unimaginable tragedy or back down to the NRA, we came together and passed the toughest gun safety laws in the country.

And in Connecticut, we didn’t look at our budget problems and kick cans down the road, we made progress by balancing our budget through shared sacrifice and tough choices.

And yes, it’s true that some of these decisions didn’t make me the most popular guy in every room, but you know what?

We made them anyway, because they were the right thing to do.

I stand here tonight in awe. In awe of the spirit of the people of this state. Hardworking people who never back down from a challenge or shrink from a fight.

In the aftermath of a national economic storm, we found ourselves in worse shape than most other states.

But we didn’t back down.

We invested in our small businesses with more than $108 million dollars in loans and grants.

We kept small businesses from going OUT of business.

We supported our workforce with increased training for the long term unemployed that has helped more than 2,000 people in Connecticut find jobs.

We’ve made investments in infrastructure that will create jobs today and continue to provide opportunities tomorrow.

Thanks to our efforts. Thanks to your tireless work our private sector has now created more than 52,000 jobs, and Connecticut’s unemployment rate is at a 5-year low.

And with your help, we’re doing more than just focusing on the present.

We’re building a strong foundation for the future.

The economic development strategy we put in place is the first, real long term economic strategy that this state has had in a long, long time.

We are leading the way in bioscience, digital media, advanced manufacturing and other industries that are poised for growth and primed to strengthen every corner of our state.

Yes, big projects like United Technologies and Pratt and Whitney…

And while we have to focus on our economy, our future will also be defined by the choices we make today for our children.

That’s why we’ve invested an additional $237 million dollars in our schools, with 92% of that money going to the schools that need it most..

And let me be very clear, we are not done yet.

We made a historic down-payment on universal pre-k so that no child will be denied a Pre-k learning experience because of their parents income or their zip code.

We invest in the potential of our children.

We trust in the incredible ability of our teachers.

Because, we Democrats know that you don’t steal from our children’s future and pretend that it’s good for our economy.

A strong economy requires workers of all types, including those who earn the minimum wage.

So we need a minimum wage that respects the dignity of hard work and the reality that far too many minimum wage workers are living in poverty, most of them women supporting their families.

You may have heard about Louisiana Governor Bobby Jindal foolishly saying that a higher minimum wage was quote “a white flag of surrender.”

Well I call being the first state to raise the minimum wage to $10.10, something else.

I call it a badge of honor.

Because we know that raising the minimum wage to $10.10 by 2017 is about more than money, it’s about respecting workers, valuing hard work and giving people the opportunity for a better life.

It’s good for our workers.

It’s good for our businesses.

It’s good for our economy.

It’s good for our families.

And let’s not forget — we created the earned income tax credit in 2011.

You put that together with our increases in the minimum wage and we’ll move tens of thousands of Connecticut families out of poverty and into the middle class.

And let’s talk about health care.

In Connecticut, we created an exchange that works so well that other states are calling and asking us how we did it.

While Congress has voted more than 50 times to repeal Obamacare, under Nancy Wyman’s leadership we got to work.

And as a result, more than 208,000 people in Connecticut signed up for quality, affordable health care.

Our progress has extended beyond our budget, our healthcare and our classrooms.

We became the first state in the nation to guarantee paid sick days to our workers.

We funded more affordable housing over the past four years than Connecticut had in the prior twenty years.

That’s housing for seniors, for working parents, and for our young people just graduating from college.

We put Connecticut solidly on a path to end homelessness for veterans and to help them get the jobs they’ve earned.

We strengthened our pension system for generations, ensuring that we can live up to our obligations today AND tomorrow.

We paid down more than $11.5 billion of our state’s long-term debt and are the first administration to do so in recent history.

We put in place Connecticut’s first-ever comprehensive energy strategy. A plan that will lower the cost of energy for homeowners and businesses, while protecting our natural resources.

But this isn’t just MY record.

This is YOUR record too.

It’s the people of Connecticut’s record because it was their sacrifice that allowed us to begin turning our state around.

It’s OUR record as Democrats.

A record made possible by the courageous legislators whose votes helped make this happen.

I hope you are all as proud of that record as I am proud to have you as allies in this fight.

Tonight, you’ve heard about how we have budgeted responsibly and lowered Connecticut’s long-term debt.

Tonight, you’ve heard about the investments we’ve made in education and how we will refuse to allow the other side to rob from our children’s future.

And tonight, you’ve heard about a vision for the future rooted in the notion that investing in our small businesses and respecting our workers is the right way to keep growing our economy.

What will the Republicans say tomorrow?

They will say that everything in this state is going horribly wrong.

They’ll blame me for everything but the weather and, you know what, come to think of it, they’ll probably  blame me for the storms too.

You’ll hear them make a lot of promises. Promises that are, frankly, as absurd as they are false.

Promises that can only be kept if they cut public education, undo the progress we’ve made on healthcare, and lay off thousands of hard-working employees.

At the Republican convention tomorrow, they will dust off that same, old playbook of faulty logic and false promises.

And you know what they’ll call it?

But, let me tell you, we have come too far to let them short-change Connecticut.

Their ideas have been tried in the past.

They have failed in the past.

They drove us into the ditch.

And they are part of the reason that we found ourselves in the hole we were in when we took office.

They’ll make ridiculous claims and hope if they say them often enough, the voters of Connecticut will actually believe them!

But here’s what they won’t tell you.

They won’t tell you that the so-called solutions they’ve proposed would create a $3 billion dollar deficit.

There are only two ways they could reduce that deficit:

The first one would take a magic wand

The second would take dangerous cuts to public education

They’ll tell you that the minimum wage was fine just where it was at $8.30.

A wage that guaranteed full time workers living in poverty.

And they’ll continue their collective scramble to sell out to the NRA.

But let me be perfectly clear, we are not going to let them distort our record, deny our progress, or deceive their way into the Capitol.

We’re going to win, make no mistake about it.

Our vision for the future is clear. We will continue to make historic investments in education, from universal pre-k to college and beyond.

We will continue to invest in small businesses because we know that creates jobs.

We will continue to increase the number of people getting quality, affordable health care.

We will continue to make sure that the minimum wage increases we’ve passed aren’t rolled back.

And YES, we have made down-payments on the future and we have made progress together, but we are not done yet.

No one will turn this clock back.

And we will preserve our hard-fought progress.

So, tonight, on behalf of every Connecticut resident who believes that education can’t be cut;

On behalf of every worker who believes the minimum wage must be raised.

On behalf of our neighbors who believe that fixing health care is more important than fighting about health care.

Every middle-class family and every family struggling to make it into the middle-class who believes that progress is always worth fighting for, I proudly accept your nomination to continue serving as your Governor.

And make no mistake about it, we are going to win and we will continue our progress.

Thank you, God bless you all and God bless the great state of Connecticut.